Can a dog make you a better parent? 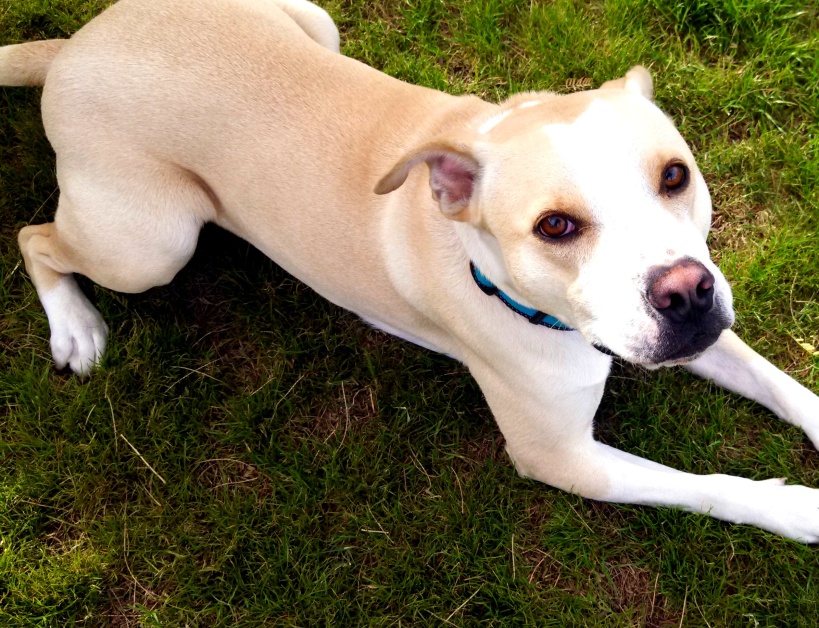 Before my husband and I had kids, we had dogs. We were the kind of dog owners that thought we were superior to parents of children because to us, dogs were clearly superior to children. They don’t keep you up all night crying, you only have to feed them once or twice a day and they poop outside. If you want affection, all you have to do is invite them on the couch, then push them off when you’re done.

We loved our dogs but that didn’t make us good doggy parents. When one dog proved to be a challenge, we thought adding a couple more to the mix would make things easier. After all, they could just take care of each other, right? We had unrealistic expectations of their behavior that they could never live up to. We demanded that they go against their nature to please us and since they were such sweet and eager beings, please us they tried. We yelled at them when they misbehaved but offered no meaningful guidance and we were embarrassed by their spastic behavior in public and when people came over.

Wait. Are we still talking about dogs? I’m having a flashback to childhood.

Everything changed when we decided to procreate. Two of our dogs were euthanized due to old age illnesses and the third was found a home when we she began to howl every time our baby son cried. At the time, I had no idea how to make her stop and it was more than I could handle as a new mom with another baby on the way. I wish I could have a do-over on that one.

Last May, we made the huge commitment to get another dog. This time, recognizing that it actually was a huge commitment, we resolved to do everything differently. We became fanatic followers of Cesar Millan, aka The Dog Whisperer, and learned all we could about dog psychology. We were determined to not treat our dog like a human by attaching human meaning to dog behavior and setting unrealistic expectations for our human/dog relationship.

Our dog, Rocky, is a pit bull mix that we rescued from the Humane Society. He was a year old when we got him and had already had two owners. We didn’t have much information on him except that he was supposedly good with children, which turned out to be true. In fact, he’s fantastic with humans of all ages and great with other dogs.

He’s also very sensitive to adult energy. While he ignores and is generally unbothered by the unpredictable behavior of children, he pays very close attention to me and my husband. Dogs are similar to horses in that they can sense our emotions through our body language and tone of voice. That’s why horses are used in therapy and probably why I’ve always been uncomfortable around horses. When I’m around a horse, I think it’s either going to bite me or try to read my mind. Some people feel the same way around dogs.

A good example of Rocky’s sensitivity to energy is how he used to be on walks. It can be a real challenge to walk him because he gets excited whenever we see another person or dog (or lizard, or squirrel, or leaf blowing on the ground). In the beginning, he constantly pulled on the leash, driving me crazy and I began to dread walking him. As hard as I tried, I could not master the calm/assertive energy that Cesar Millan touts as the cure for most dog behavioral issues. I mastered angry/assertive and frustrated/assertive but calm eluded me. I was very good at pretending to be calm. I smiled sweetly, relaxed my body and spoke in a soothing voice. My cool-as-a-cucumber act worked on every human I know but Rocky wasn’t buying it. Inside, I was still angry and Rocky knew it.

The breakthrough came when I finally said, “Rocky, I’m so pissed at you right now. Why can’t you just calm the f- down and stop acting like a dog!” He looked up at me with his big, brown eyes and sat his butt on the pavement, listening to me like I was the most fascinating person he’d ever set eyes on. My frustration started to melt away and I laughed at the absurdity of it all. I was taking his behavior so personally when all along he was just feeding off my energy.

Rocky has made me very aware of the power of my energy. Have you ever been in the presence of someone who appeared to be calm but you could sense a seething anger or anxiety emanating from below their cool exterior? Your gut tells you that despite appearances, you just can’t trust them. That’s how dogs see us when we pretend we’re not mad or are hiding our frustration. They see through us even when we have a fake smile plastered on our face. It was a big wake up call to realize that if I want my dog to trust me, I can’t just pretend to be calm and trustworthy. I have to become calm and trustworthy.

Kids are just as sensitive as dogs. They look to us to know that they’re safe in the world so it’s natural for us to try to be strong for them. We often feel bad when we’re not completely in control of our emotions in front of our kids and see it as a sign of weakness. Dogs actually do see our out-of-control emotions as weakness but the big difference between dogs and children is that kids grow emotionally when they see us resolve our feelings. My false calmness made me realize that I was missing opportunities to be real with my kids, thus denying them permission to be real too. The fake smile and sing-song voice that I use when I say, “Now son, I’ve asked you 27 times to put your socks on,” doesn’t fool anyone. As long as I’m not being unkind, it’s good for my kids to see me work through anger and frustration. And, I need to give them room to work through their feelings too instead of being intolerant of emotions that are inconvenient for me.

Admittedly, there are circumstances when we need to mask our emotions for our kids, like at the doctor’s office. It doesn’t do them any good to freak out right before they’re about to get an armful of shots (OMG! That’s going to hurt so bad!). However, without being conscious of it, we spend a lot of time teaching our kids how to be good fakers. We encourage them to have a good attitude regardless of how they feel, be a good sport and turn their frown upside down. I’m a big fan of “fake it ‘til you make it” but my dog made me aware of the irrefutable fact that if my intellect and emotions are at battle, my emotions will always win.

It’s funny to me that I assumed that being a parent of children would make me a better dog owner. Instead, my dog is teaching me about being a good parent and a balanced human being.

13 Comments on “Can a dog make you a better parent?”

In bed sick on a rainy day snuggling with my kids’ lovies and the cat. The only sound is the rain. If I wasn’t feeling so crappy it would be the perfect day! 🌧